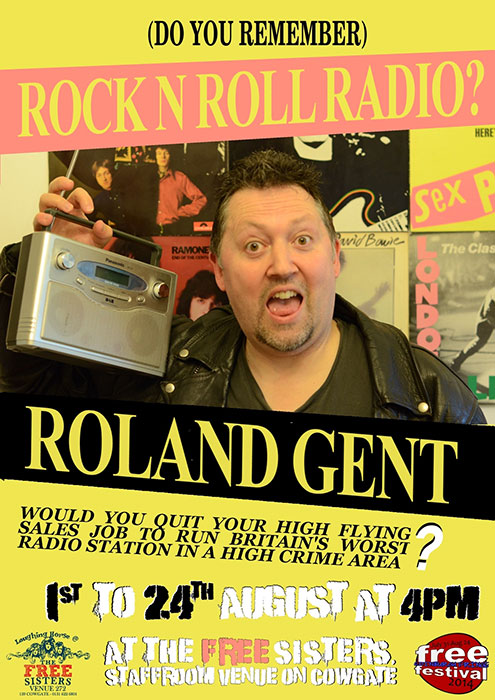 Do You Remember Rock n Roll Radio? is the tale of one man’s ambition to work in radio instead of being highly successful in sales.

Every job has its pitfalls and England’s worst radio station in a high crime area awaits him. Will the presenters listen to a word he says? Will he improve the station before the locals set fire to it? Will the scary children steal everything? Does the Station’s logo look more like Billy The Fish or Rolf Harris?

Hear reminiscences on the history of radio, join in with some of the worst gaffes ever, including the all time classic “Jeremy Hunt”, find out just why do so many newsreaders have weird names and ask yourself, why is there so much bland plastic music about?

Warning; May be found offensive by fans of the X Factor

Appropriately enough the sound of The Ramones’ 1980 hit This Is Rock ‘N’ Roll Radio usher us in to Roland Gent’s show. The 50’s American nostalgia as depicted in the song, though, seems a million miles removed from contemporary radio, and not just geographically.

Roland Gent tells his autobiographical story as a journey, a journey from darkness into light; from discordant sound to rock ‘n’ roll radio.

A huge, likeable presence, Gent, at first seems nervous, which it is at odds with his physicality, emphasised as it is by his hooped t-shirt and very low ceiling. The paucity of the audience may account for his nervousness, but he never makes the mistake of blaming those who turned up for it being a small house. He is an inclusive comic, making sure that everyone is involved and having a good time. Several times he checks that his audience are comfortable with filth; it’s just as well they say ‘yes’ because filth comprises some of his best material. There is unalloyed joy in hearing (once again) the Today programme mispronouncing the name of the then Culture Secretary, Jeremy Hunt. Gent trumps that with equally hilarious examples from Radios 2 and 5.

Stand up is, quite possibly, the hardest of all the performing arts because it relies on a degree of personal exposure; of establishing an instant relationship and rapport based on your own personality. Thankfully, Roland Gent’s personality is both likeable and very funny; and for all the bluster and swearing you sense there is a genuine empathy with those who have no escape from the depressing estates where the radio station is based.

What Gent does is create a temporary community out of his audience, and that temporary community celebrate together tiny victories as the Daily Express, Cabinet ministers, and various other powerful institutions are shown up for what they are. We are united in our ridicule; it may not change the world, but it makes us feel better.

So, if you have a spare 45 minutes go and see Roland Gent’s show. He deserves to been seen by more people; this would be electric with a full house. Providing you’re not offended by words that rhyme with sock, duck and hunt, you’ll be in for a liberating and uproariously comical evening.

Incidentally, doesn’t Max Clifford’s Tiny Penis sound like the name of one of those post-punk bands John Peel used to have in session on his show?